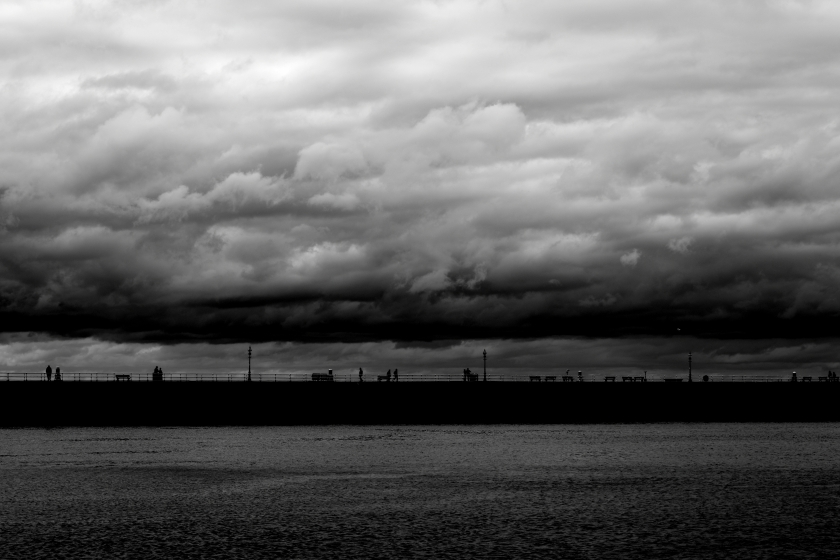 Under a piece of tarpaulin, draped inelegantly over a pair of upturned shopping trolleys, we listen to the patter of the rain above us, a pool developing over our shoulders.  The damp seeps into our shoes and clothes, our hair is lank and clotted with wet dust. She pops another codeine between chapped white lips as we watch a pointless landscape disappearing into the murk.

As kids we played as a pair alone, long days and evenings, not pausing for breath until we were profusely bleeding into each other.  We scrambled over barbed wire fences, took out security cameras with fishing slingshots and lobbed aerosols into the fire, holding our nerve to stand still and feel the white hot ice of glowing shrapnel slicing through our shins and thighs.  We pissed in doorways, cuddled under hailstorms and licked each other’s muddy arms until we looked like a pair of half-starved and shaved tiger cubs.

I look across to her now; twenty years older and forty years wiser.  The cheekbones are hollow, casting deep pools of shadow like bruises on a fallen apple, but I still see those fresh razors just concealed by puppy fat.  The most beautiful faces and bodies are the most lived in – just as the most cosy house has dust in the corners and the smell of old dinners. I put my hand on her bony knee and give it a squeeze.  She smiles at me, but I can see the first waves of codeine are assembling with the tails of the previous hit, creating the chaotic confusion of a torrential river flowing out to sea and meeting the incoming tide.  I could be a sack of potatoes with a face drawn on them now, so I reflect on our first meeting.

It started with a fight and ended with a sprint.  I hadn’t slept in three days, and decided to walk down an alleyway I knew was dangerous.  The air was always heavy with musk and rotten things – dead wood, dead plants, dead tarmac; disintegrating animals with ribs protruding outwards like awful flowers.  I could feel myself nodding as I drew in the thick miasmic skunk, clinging to my nose hairs and eyelashes when I saw her casually leaning against a lamppost talking to a guy.  She was having an argument and had been called a cunt, and her response was inspired; you wish you had a cunt.  Cunt’s crush dicks like paper covers stone.  Moving her hand from behind her back, I saw a triangle of glass jammed between her middle two fingers.  She smiled, cocking her head to one side and said, fist bump?  A few seconds later the boy had the glass embedded in his cheek, the silent scream only serving to tear the flesh further apart as bright red juice spilled down his jawline.

As we ran together, I tried to introduce myself but I could only make breathless noises.  So from that day on, my name was ‘Tah’, said as though suffering from an asthma attack. We ran past the point of his muffled yelps, beyond the visual sight of the alley, beyond that tree-lined avenue until it was a moment that had never happened.  We rested until the stars came out, when the night was dark enough that we didn’t have to retrace our steps and see the trail the boy left as he staggered home.

Reminiscing does none of us any favours though.  There’s a reason I tend not to dwell on how we met, and as I look back to that face now finally settling into an agreeably numb groove, the chemicals aligning to form a comfortable compound, it’s hard to imagine what those eyes have seen.  I look down at her hand and she’s idly flicking a triangle of broken glass between the gaps in her fingers, back and forth. It’s a dreary day, but she seems happy enough. I pop a pill, wash it down with a polystyrene cup full of cheap vodka, and settle down for an evening of sensory drumming as the rain sprinkles down on our pathetic little tent.

4 thoughts on “When We Were Tigers – Free Verse Revolution”