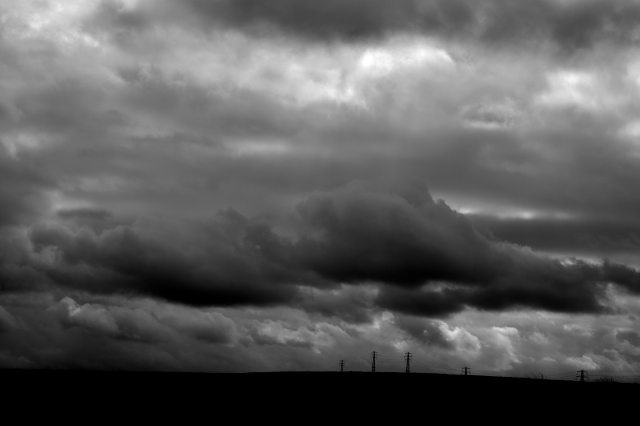 She sits, legs dangling, on the remains of the stairs.  Her feet are bare and sticky with blood from three or four nails that plunged into her flesh as we scrambled inside the Old Hotel.  It doesn’t concern her though, except when she winces and complains of itching, and the little bloody holes are opened again running maroon and smelling faintly of rust.

Around us are the words of the lost, layers of dissatisfaction under the many slices of wallpaper, all jarringly hideous and rotting.  Some from the usual crowd of junkies, squatters and winos, but also from those who stayed here before it died – not with the bang of a closed door but a gradual bleeding until the last cleaner gave up the keys with a rusty hypo at her eyelid and never returned.  Now, as the shiny high rises climb to meet the sun like daises, our little cancer refuses to be moved.  So ruinous as to be impossible to safely demolish it stays, growing cracks across the walls like lines on an old face.

I look across to those kicking feet, and then I glide my eyes upwards along bruised legs, skinny arms, welts on the shoulderblades from a guy she’d judo-thrown when he lunged for her arse, and a timeless face – somewhere around 15 or 50 with many other lifetimes squeezed in.  I’ve seen her deranged, happy, and melancholic.  I’ve seen her laugh, cry and spit in the eye – in the eye socket – of failures.  I’ve never seen her tired before.

I get up and stand between her ankles; those feet radiate warmth which could be her internal furnace or the first seething infection.  She looks down at me and a sad, involuntary smile curls one side of her mouth.  Veins run bulging and purple up her calves as though she is soon to be assimilated by tree roots.  I kiss the ankles that I love so much and the kicking stops.  Blood drips with an audible pat on my shoes as I kiss the heels, the arches, the wet toes and my chin glistens and begins to clot.

She ushers me away and jumps down, landing with a firm splat and leaving two perfect red footprints on the old floorboards.  I have a box of matches in one pocket, some lighter fuel in the other and a ton of ideas.  She walks past me and shakes her head, ambling gently towards an old mattress in the corner of the old dining room, walking like a ballerina with broken toes trying to finish the dance.  She flickers in the rectangular slabs of open light in this dank and oppressive space, curling up on the blackened fabric remains and turns her back away from me to face the wall.

Over six days I leave her in peace and return to see that she is okay.  Never moving from the position, I listen out for gentle snoring – I’ve never seen her sleep and I’ve never heard her breathing before.  The blood flakes off to reveal skin that turns pink, to gray, to a mottled purple and green.  On the seventh evening the mattress is still there but she has gone.  I search the entire place, slicing my palms on broken glass whilst climbing to the first storey, almost shattering my kneecap when I step through a rotten board and lose my leg inside an old chimney stack.

I make it to the top floor, the ceiling gone, the roof pockmarked with holes, and find a dry corner to sit down.  Taking off my shirt, I rip it in two and wrap both rags around my hands to stem the blood.  My knee won’t flex properly.  Feeling faint, I rest against cold stone, and look up for a glimpse of the first stars, for a breath of air.  It’s now that I see her again, peering down through one of the holes; a silhouette blacker than the night, one pale dangling bare foot, and a pair of unreadable, watchful eyes.