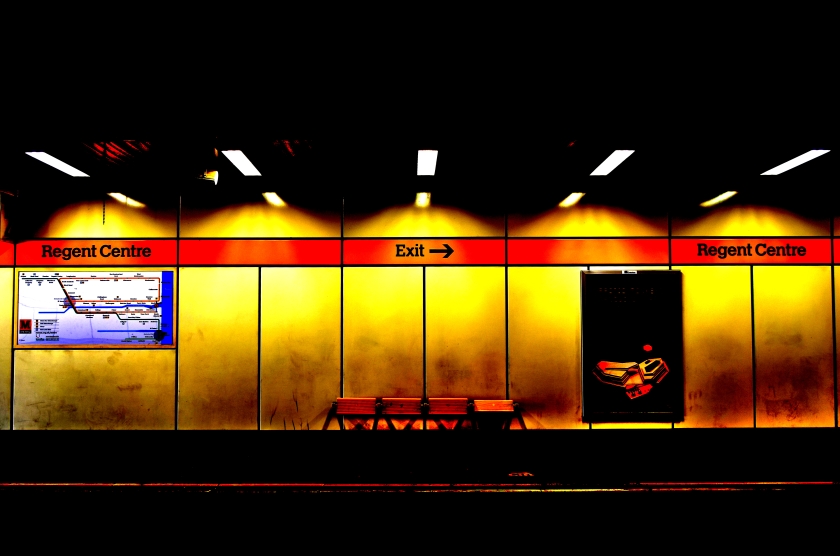 I climb, gasping, up a green slope slashed white.  Here, the grass unzips over the chalk; just a papyrus layer of broken skin.  I can feel the Earth vibrating through the soles of my bare feet, tingling and stung by nettles and thorns.  Air whips around my ankles, uncovered and unfamiliar.  I flashback to a memory of a knee sock being slowly rolled down on a hot day and seeing bristles of unshaven leg hair clinging to the fibres.  I understand completely.  I cling as well.  I cling to everything.  The odour of a sweaty foot in thick wool on a hot day.  A sticky forehead and a greasy fringe.  Bad coffee breath and grey patches under the arms.  Even the furry teeth and a poisonous tongue, yellowing from a rusting, home-made stud pushed (unblinkingly) through.  All these foul things I embrace in a personal degredation.  It’s not that I don’t think I can do any better.  I just don’t want to.

I look in front of me.  The path winds on ahead as everything falls away dramatically to my left and right.  The ridge reminds me of her spine as I once viewed it on a lethargic summer afternoon, gently kissing her naked figure from ankle to buttock as she lay on her front, indifferently reading a book and eating fruit salad from the can.

We’re in bed.  I’m on top, balls deep and pounding away, giving it so much oh jesus oh god yes so good when I realise she’s stopped making any noise of her own; in fact she’s staring straight through the back of my skull.  I lose my train of fuck and pull out, hovering above her like an indecisive murderer holding a melting knife.  Her face falls out of her weird trance and she starts looking towards me, her pupils flicking left and right to meet mine.  I feel her entire body, beneath me, relax back into familiarity with a deep sigh.

“Taking a woman’s sex and turning it into a violent wound.”

“He was always throwing it around.  Always.

The first time we sat down and discussed what scared us most, I realised that all my answers were wrong.  I talked about spiders, cancer and being burned alive and I concluded that all my fears were about the realisation of death before it happened – the slow crawl of a venomous tarantula in an infinitely large jungle, the slow decay of cancer, the gradual and agonising disintergration of immolation.  She remained uninterested until my last answer, when her own fire lit behind her pupils and she wondered aloud how it would feel to watch the digits of your own fingers turn to black and drop away like so many rain-sodden winter branches.  Her fears were seemingly obscure and wilfully obtuse – train journeys, junk mail and motherhood – until I realised it was all about a loss of control about circumstance and identity.  The loss of control during a journey, the loss of control over a social construct or your gender or age, the loss of control over your body.  My fears were all about endings, but her fears were about the middle bit of the story – the bit where the focus could shift at a moment’s notice from one character to another.

I remembered a conversation we’d had a year or so previously, after a cinema date; imagine being the person who is deliberately cleverly written and well characterised in a film just so they can be killed off halfway through to fuck with the audience.  Like, we get involved with them, get interested in them and then they die just so we can gasp and be all ‘I never saw that coming!’  And then that character, who didn’t expect to die, in their final moments realises who the main thrust of the story is about.  The movie isn’t about them, it’s about The Other Person.  And they thought it was about them! Wouldn’t that be heartbreaking?

I’d tried to reason with her.  Life isn’t Forrest fucking Gump.  Life is more chaotic than that.  Everyone has the chance to beat everyone.  Okay, don’t roll your eyes, just listen.  If I looked across the street now and I spotted the World Champion heavyweight boxer standing outside a shop, I could hotwire a parked car and run him down and kill him, and defeat him.  He’d go from 29-0 to 30-1, indefinitely.  Does that make me a better fighter?  No!  But that’s the chaotic nature of life.  No one is better or worse.  You just have to understand your universe.

She let go of my hand.  Maybe you’re right.  But what’s wrong with us being here for a specific purpose?  Why do we need to know other things if we already have our journey mapped out.  If you don’t know… if you need to understand something, it’s probably not worth it.

I lay propped against a tree and she is nestled in the crook of me.  Our legs are interlocked like the French braid in her hair, that I toy with between my fingers.  Our breathing is as one; as my chest raises so does hers.  We’re both being eaten alive by midges and sometimes we accidentally scratch each other’s bites and itches.  Her sweat dampens my shoulder, mine seeps into her back as she lays against my chest and stomach.  I grab the tuft at the end of her braid and realise it is full of aphids.  No matter.  I’m not selfish.  I’m happy to share.

My arm rests across her breasts and she idilly drags a scalpel across my skin, letting the broken white skin bloom across the red sunburn, trying to join the dots of my numerous freckles and moles into the constellations of the stars.

‘…I have this anxiety dream’

The razor stops on my skin for a moment, and I can feel every muscle in her body tense up.  I can’t tell if it is fear or anticipation.  She gives my wrist a little squeeze and tells me to continue.

‘I’m driving us in a car towards town.  You’re in a summer dress with your feet up on the dashboard, which pisses me off when you do that for real, you know?  Anyway, we head into town and ahead of us we can see the main high street and the traffic is bad.  Real bad.  Everything is jammed solid.  So I start to press the brake pedal, because I’m being really cautious, except the car suddenly accelerates.  I try all the other pedals and they all react the same way.  I realise that I’m driving now headlong into a wall of cars and trucks and the car keeps accelerating everytime I go near the pedals and it just doesn’t slow down, and I’m still hammering away at them hoping that they start doing what they are supposed to, but the car just gets faster and faster and then I try to steer away, to throw the car into a spin or something, anything, to slow us down, but the steering is all fucked…’

‘….and I realise that we are being drawn somehow, like a magnet, towards this petrol tanker, and I know we’re going to hit it so hard and cause a massive explosion that will kill us and many others who will be trapped in their cars in this traffic, and I turn to you and I am going to tell you that I love you and I’m sorry and I have tears down my cheeks even though I’m not crying and you have tears too but you’re laughing…. like this is the greatest thing ever, and you’re laughing not out of fear or love or… …you’re just laughing.’

She’d listened to this completely still and cold, as though I’d been cradling the statue from a tomb.  The scalpel that hovered over my arm now drifted away like a derelict space station until she finally dropped it into the grass clambering around us.  Her muscles relaxed but then stiffened again into a tight embrace.  Her arms pulled mine around her tight, and she ran her palms gently over my red and white slashed skin.

“Well, at least we’ve got an ending to our story” she smiled, “….and I guess that’s better than most.”