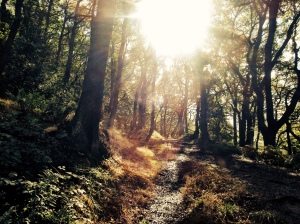 One of my favourite parts of Douglas Coupland’s Life After God (which is most of it) features several narrators discussing what they were doing when the world ended.  Office workers standing at a photocopier.  A commuter stuck in a traffic jam when suddenly the back of the queue begins to blow their horns like a tsunami of irritated noise.  Someone walking to the fridge to drink from the carton of milk.  The mundanity that surrounds so many endings.  It’s why I like to capture the sun through objects.  The explosion of light through trees, or a ruin, or a broken window, reminds me that I might actually be doing something enjoyable when it all ends.  Who would begrudge someone who wants to go out with a smile on their face?

If the world had ended as I tramped up that footpath, the trees surrounding me like concerned wellwishers, I would not have died unhappy.  I would be content.  In my elements, all 65 of them. 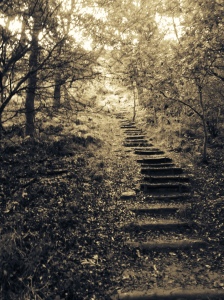 Summer is over and frankly I am happy to see it gone.  Working in a hotel over a summer period has been exhausting and exhilirating in equal measure.  I love my job, which is a relatively new experience for me.  But I don’t want to do it every day.  I love drinking whiskey, but after a whiskey diet of two weeks I’d be crying out for water.  So I look forward now to the leaves falling and the brisk northern wind that made me shiver today as I walked around town with my gloved hands jammed deep in a cow’s pockets.  This summer has been idyllic – the parts of it that I have seen.  Now, it’s time to move on from Friedrich and embrace Turner on absinthe.  Bring on the wild weather.  Let’s see some clouds.  Let the sky roar. 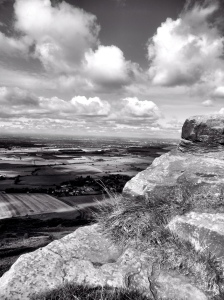 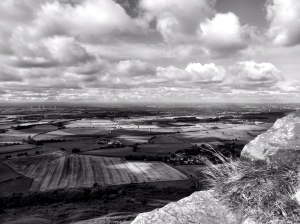 There’s nothing like a Bedfordshire sky, and I still stand by that.  But sometimes, living on the coast, it feels like a place where all the clouds gather together and decide where to fly away.  Like bombers marshalling around landmarks before radar, grouping together before imposing their destruction.  You can climb to some tall places on the right kind of day and feel like you could touch the sky.

“Once there was a way to get back home” say The Beatles on ‘Carry That Weight’.  Once there was, but now – as it has been for a while – I’m not sure where home is.  I can’t point to a definitive location and say, *there*.  All I can do is run around looking for the latest connections.  And they keep coming.  I went to a Manchester nightclub alone and bounced around to the Manic Street Preachers with a couple of guys.  I sat on a train and met a photographer as I sat at a table seat peering into my camera at the day’s shots.  I will probably never see these people again, but it doesn’t matter.  It seems to be in keeping with the nomadic spirit of things. 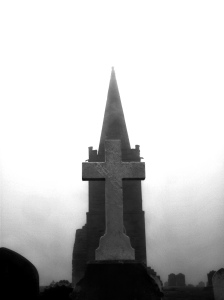 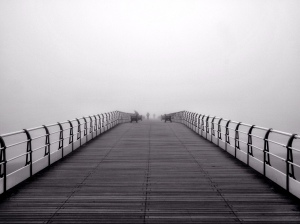 My writing, which had been on life support for some time, now feels dead.  Placed in a wooden box and lowered into the maggots dead.  Before, even during ‘writer’s block’, I would continue to have ideas and dismiss them; either because they were inferior or just out of fear of fucking the idea up.  Now, I don’t even have ideas.  I’m just looking at everything from the point of view of light.  Angles.  Framing.  Photography seems to consume all.  Even writing this entry is a struggle, so I’m padding it out with photos.  I look at the entries of other people and I see no fear.  I look at my recent entries and I see a man tiptoeing everywhere.  I wish I could still be fearless.  Going back over old journals there was a lot wrong, but it was uncensored and completely disregarding whom it may or may not offend.  I never thought about my readers before – now it is my constant Tipp-Ex.

I’m looking forward to going back to Dunstable.  I intend to photograph it as I have never done before.  I’m looking forward to seeing faces I like.  Sometimes, living where I do now, it feels like a small-time mentality.  Everything is so fair-weather.  Nothing is permanent.  There is no sense of an outside world, just a set of circumstances that reset after 24 hours.  No principles.  I struggle to deal with this insincerity sometimes.  Dunstable might be a shit hole, but it’s honestly dishonest about it.  Not that I ever want to return you understand.  Wild Boris Johnsons couldn’t drag me back for good, or for evil.

Whenever I hear it, which is often, I’m reminded of a tube train screaming through a station on the London Underground.  Especially the ending.  The way the song abruptly cuts off into a series of clanking echoes sounds, in my mind, like the tube train that has just pulled away, retreating into a tunnel as you stand on the platform coated in warm air, human hair and dust.